Decorating the nursery is one of those things I think most expectant nesting mummy’s dream of doing. I was no different and yet I have only just finished it… and he’s 18 months old!

Before he arrived we were using the room as an office, so knowing he’d be sleeping in with us for the first 6 months of his life we waited… and then waited some more after making the crazy decision to bring builders in to make some rather drastic changes to the house.

I was nesting though, I couldn’t hold back… I knew how I wanted it to look and just didn’t have the room to create, so instead I made pieces. It’s only recently I was able to get the paint on the walls and carpet on the floor, but finally all the bits I’ve spent over a year crafting have finally come together to create what is now my favorite room in the house. 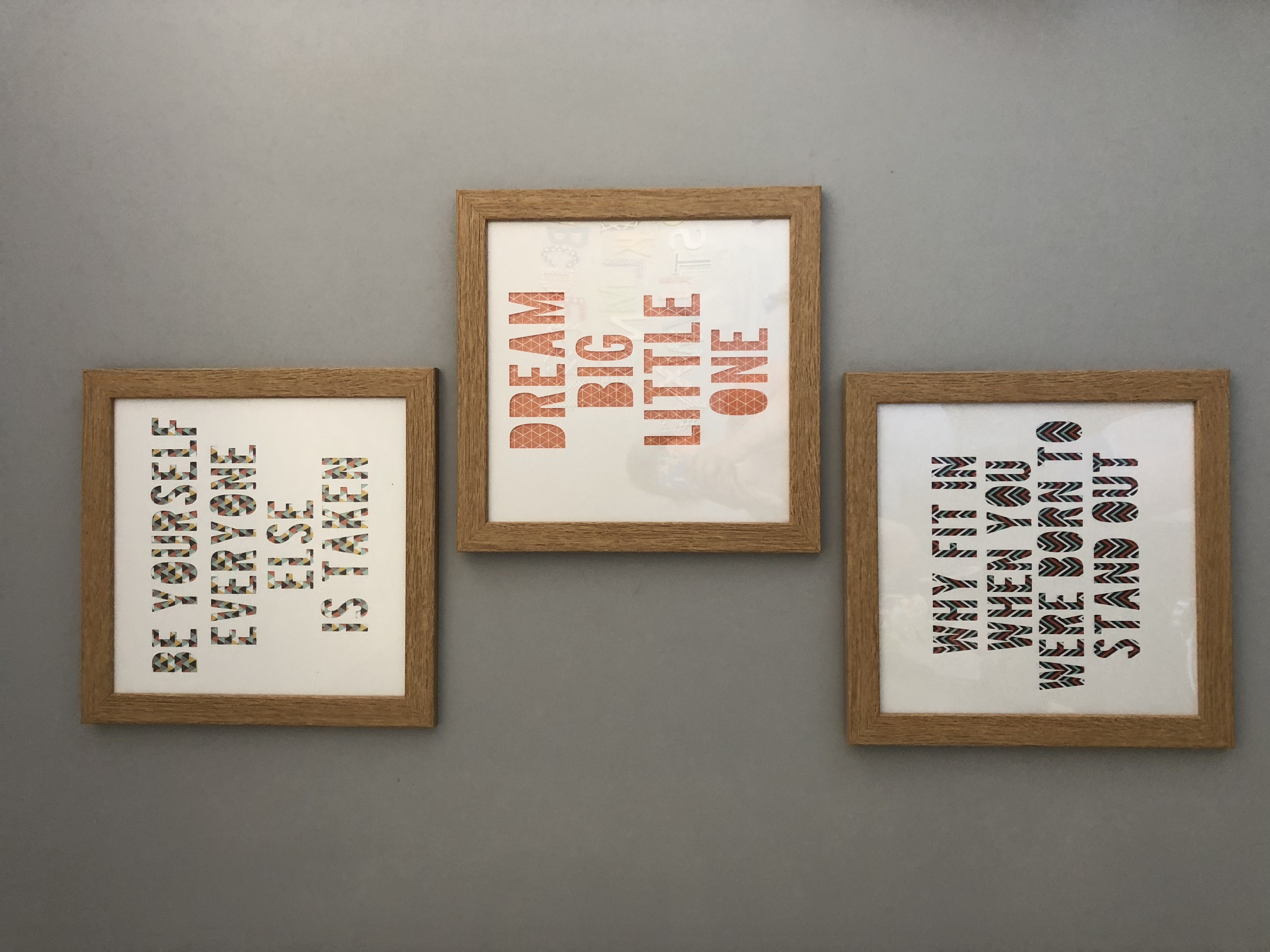 It’s so simple to do and yet really jazz a room up. I used my cricut and some card to make these lovely sayings to hopefully inspire my son as he grows. 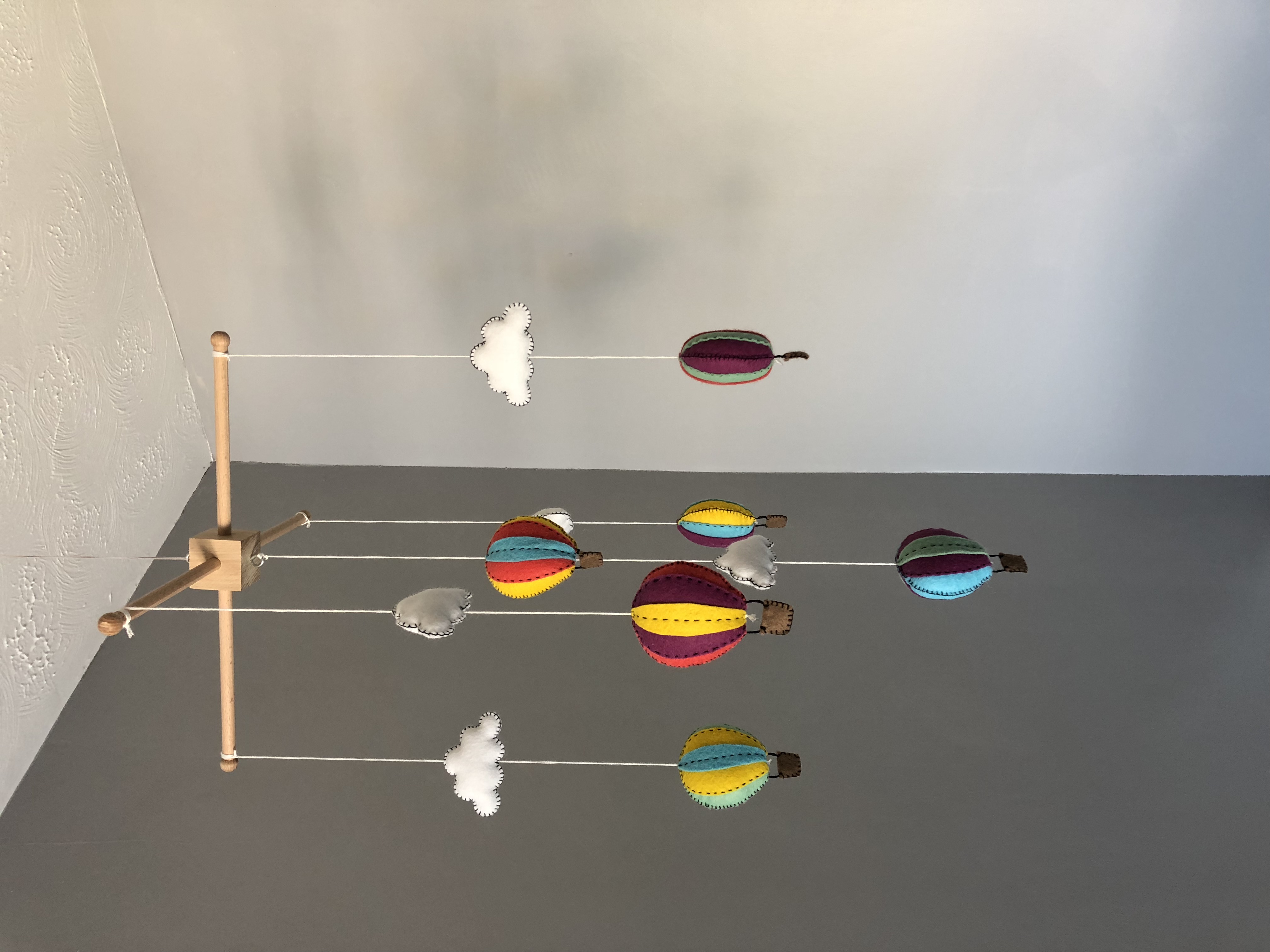 This mobile came in kit form from Etsy. I loved putting it together of an evening both when I was in labour (and no I’m not kidding) and also whilst my son slept during the newborn days. It was so simple to do, and yet is such a sweet mobile to hang above his cot. 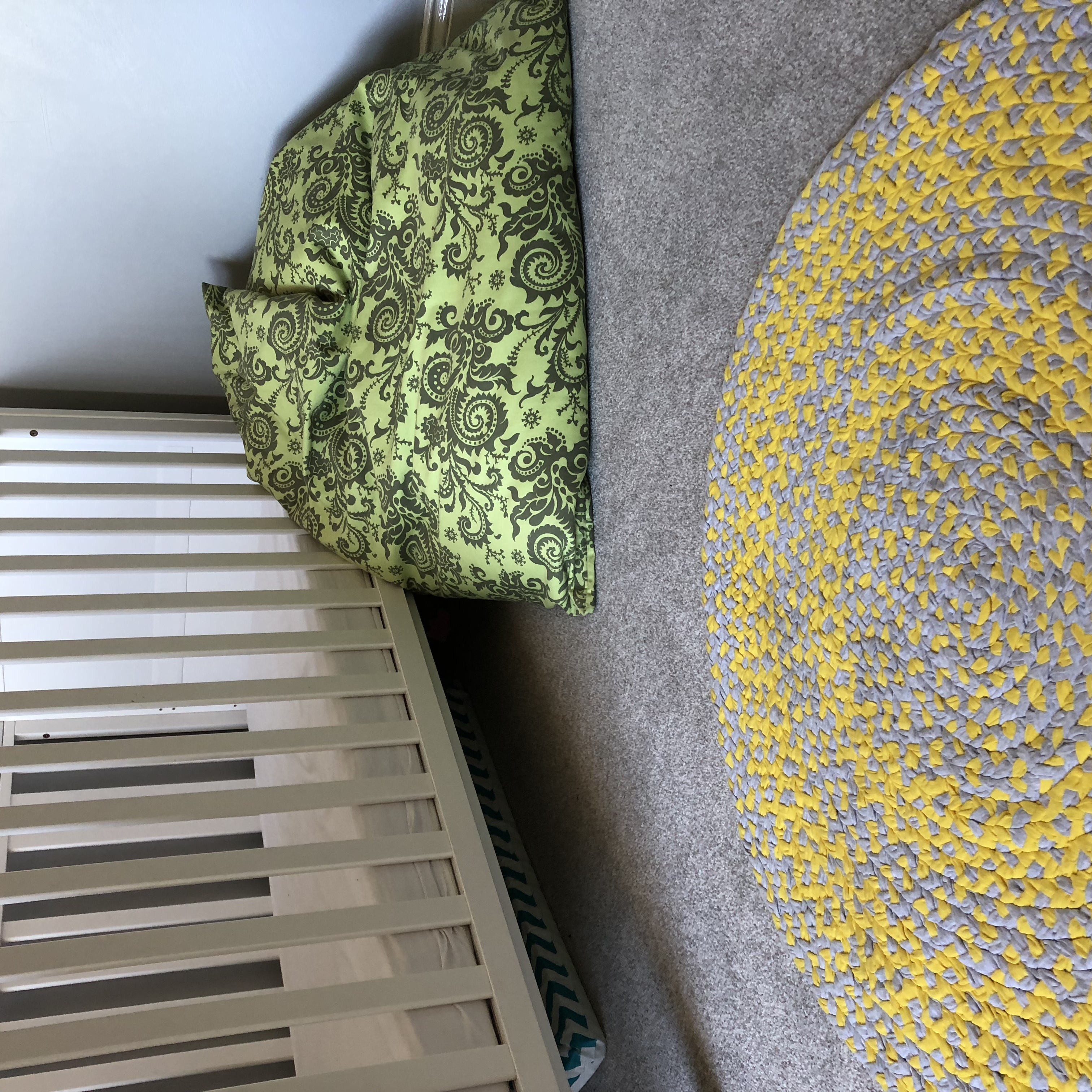 Cushions and curtains can make such a difference to a room. I chose to add a beanbag and it has become my sons favorite thing. He likes to take a book from his shelves and then lounge on his beanbag whilst turning the pages. The beanbag is a pyramid style with a zip underneath to get the beans in and out. I used an upholstery weight fabric to ensure it’s hard wearing and didn’t fill it too full so you sink into it. I also made this really simple little rag rug. Its created using t-shirt yarn that is plaited together and then sewn together in a spiral. I love creating ways of incorporating colour into a room without it having to be a permanent fixture. Especially with children, they can change their mind on what they like and dislike at the drop of the hat so making pieces that can be changed up with very little effort makes life just that bit easier. There are lots of tutorials on Pinterest of how to make both the beanbag and the rug. 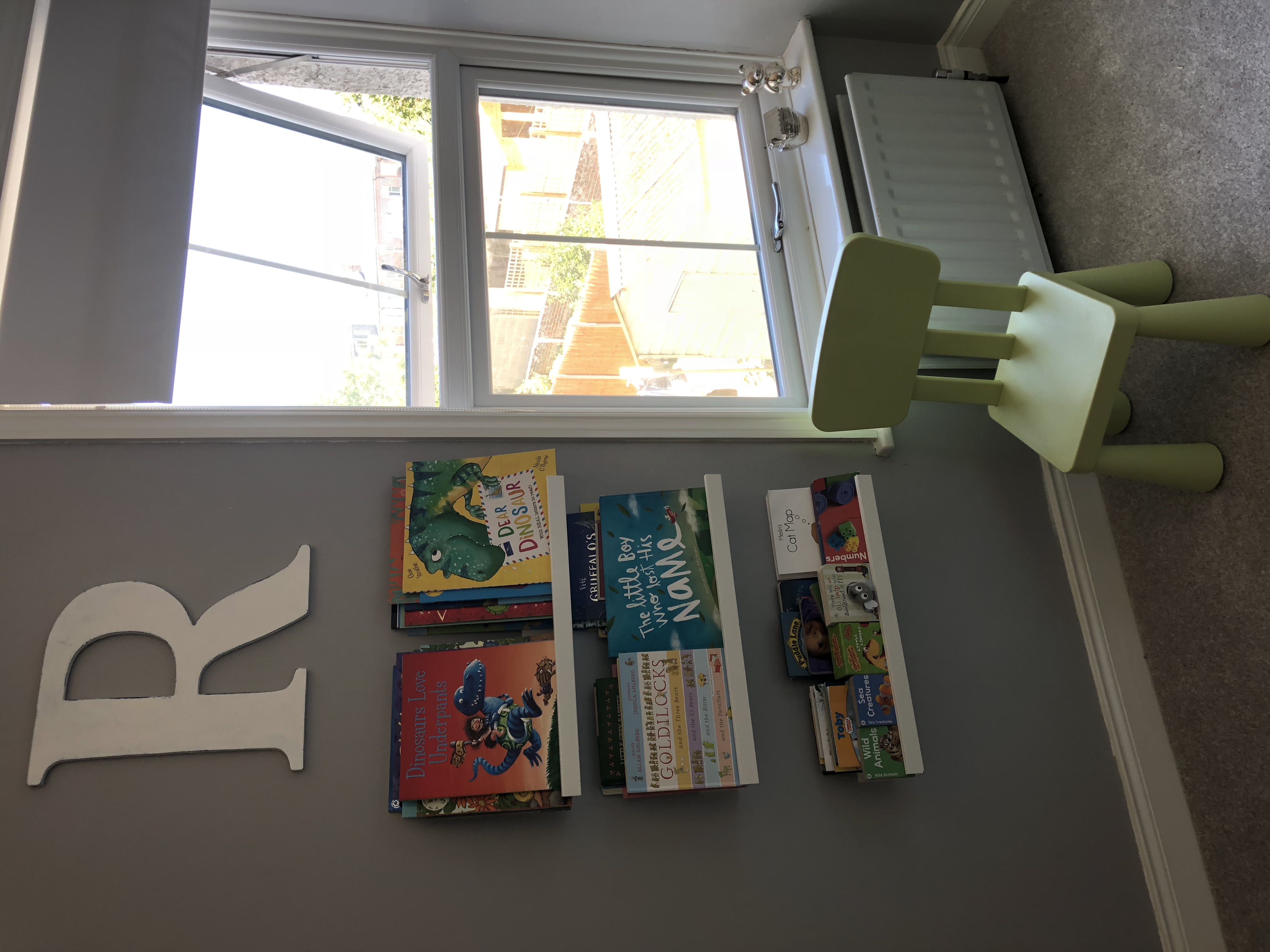 I absolutely love books! I think they hold so much joy and imagination and rarely a month goes by when I don’t add another to my sons collection. I’m overjoyed that my son absolutely loves them too. Putting shelves up like this was such a good decision as he can reach the bottom shelf and then I put the books we read him at bedtime (and that I’d rather he didn’t rip all the pages from) on the topshelf. All I’ve used to do it is IKEA picture ledges. The giant R I purchased from Ebay as a plain MDF letter (its approximately 40cm tall) and then painted using acrylic paint. Its these little touches that I think make his room feel so special.

This is my favorite part of his room, and unsurprisingly the part that took the longest to do. It was something I came across on Pinterest when I was randomly searching “baby nursery” whilst I was pregnant. I loved the idea of using the alphabet as art work, so after finding the plain MDF letters on Ebay (there are lots of people selling them) I started painting them. I used acrylic paint and got as far as P before he arrived. They were something I managed to get back to painting when he began napping for more than 10 mins at a time, and it became something quite therapeutic to do when I had some time to myself. Its one of those projects that is for everyone too, before you start saying to yourself that you’re not creative enough or that you can’t draw. I used a lot of masking tape to get some of the designs and when I made mistakes I just sanded it back when it dried and painted over it again. They are held on the wall with Command Strips, so super easy to put up too.

It sounds like its going to be boring doesn’t it, painting a room grey. It’s funny though, it has this really soft and yet bright feel to the room. When I was pregnant we didn’t find out the gender, so although I didn’t paint it until after he’d arrived I had planned it all out whilst not knowing. I also wanted something neutral so that if we have another this room could be used again if my son wanted to move to the bigger room. Grey is one of those colours that you can put any other colour against and it works. If you paint a room blue and then put lots of blue things in it, you end up with a very blue room… where the grey has enabled me to put every colour under the rainbow against it whilst retaining a sense of the room having been designed.

My son clearly doesn’t care what the nursery looks like, he’d probably be happy with just the beanbag and all his books strewn across the floor… but its not really about that is it. To me it felt like a journey, making a really special space that he then recognised as being his own little sanctuary that was built for him to enjoy.